The TV series Beverly Hills 90210 and its iconic couple, Brendon and Brenda, the Spice Girls, Cindy Crawford, Friends: here are a few benchmarks that throw us right back into the 90’s! And we are sliding slowly towards that decade, especially as far as fashion is concerned: cropped top, ripped jeans, knee high socks, and Timberland boots … the fashion of the 1990s never goes out of style! Recycling, reshaping and reinventing basic items than have been trendy during the previous decades, the 1990 represent an iconic fashion period. Here are a few looks that inspire us until today: 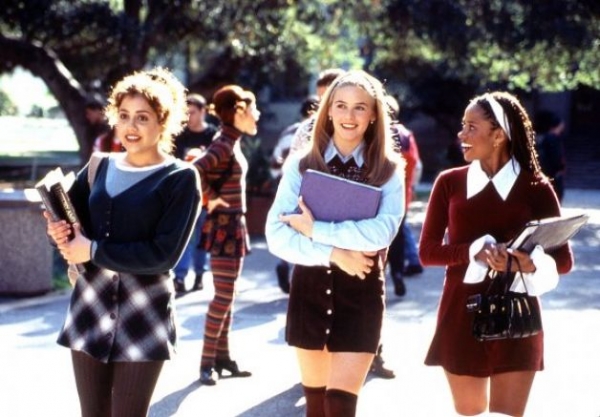 Short skirts, woolen vests, front buttoned dresses, head bands and knee high socks are the main items to include in a totally nerdy teenage of the 1990s look. Chrissy’s Knee Socks offer a variety of colors and patterns to suit your personality and clothing style. Whether you go for a pair of stripped knee high socks, or for the animal patterned ones, you will certainly look as if descending from one of popular TV series of these times – Bervelly Hills 90210, Clueless or Friends. Denim jackets, overalls and Levi’s 501 high waist jeans –the total denim look is so Beverly Hills 90210! For the guys who want to adopt it, pay attention to Brandon’s style, while the girls should certainly replicate Brenda’s. Grunge period oblige, the Nirvana style torn jeans were featuring teen rebels’ silhouettes back in the 1990s. Here is another twist to your total denim contemporary outfit that will look so trendy even today. The Hip Hop musical wave, also ubiquitous at this time, inserted the sportswear trend with its Nike Air Max or Timberland boots.

Five girls, five spicy styles, but they have one thing in common – a very pervasive feeling of the 90s and its iconic fashion items. Their style has changed along the years, but it remained unique and very interesting.

The Spice Girls phenomenon started in 1996 with the release of their first single, Wannabe, which quickly became number one in more than 30 countries. The world discovered five amazing divas: Geri, the sexy Spice, Emma, the baby Spice, Victoria, the posh Spice), Mel C, the sporty Spice and the Mel B, the scary Spice. The foundations are laid. Each cultivates a look in keeping with his personality: mini-skirt, top above the navel, and outerwear, they are, together, an anthology of fashion 90s.

In 1997, the Spice Girls released their second album, Spiceworld. On stage, they cultivate a new look – halfway between the heroines of manga and drag queens: mini-shorts, ultra-slinky pants, platforms shoes and red boa dresses. The public continues to follow: the album sold 7 million copies in just two weeks, while the Spice Girls are still the divas whose fashion any girl wants to copy.

Still a winning team, the following year, the Spice Girls took home the Brit Awards for the phenomenal sales. Orange, purple, red or yellow, the Spice Girls adopted the pop trend, while retaining their trademark: the platforms shoes, sequins and leopard print.

After Geri’s departure in 1998, the Spice Girls are struggling to take off again. The solution? A little outing in leather for the MTV Video Music Awards to promote their latest album, Forever. Even Mel C dropped her baggy tracksuit for a version of leather pants. A year later, they decided to make a break for an indefinite period and each of them got involved in various solo projects. They reunited again in 2007 for one last world tour, but their fashion print can still be felt.